How You Can Barter For Something You Want

I saw an old friend recently and he said, “Hey, how come you didn’t write about your new ukuleles you got on your blog?”

“No. I just searched it. You don’t have anything on there,” he said.

Most of my friends and readers know that I grew up in Hawaii and that I play the ukulele. I own five or six of them. Some uke players say that I have U.A.S. or Ukulele Acquisition Syndrome. But the good news is the last two new ukuleles I have, I got for free.

Well, they were free money wise, but not time wise. See I received the two new ukuleles on a barter and I’ll show you how you can do it too.

Most people have forgotten about the age old tradition of bartering. Back in the day, everyone bartered. Maybe they gave a quilt for some food or a blacksmith traded their services for a tailor’s service.

Today you can go to Craigslist and they have a “Barter,” section. Most of the times people list specific things they are looking for. For instance, I saw a guy looking to trade fishing gear for “things that go bang.” It’s illegal to advertise firearms on Craigslist. Most of the times an add like that would get flagged.

So how did I get involved in the barter in the first place? I contacted an overseas ukulele company to see if they would consider me to be a distributor for their ukuleles. I also mentioned politely that their site could use some help with the English translation. (“Wood make very good tone, nice looking.”)

I said, “I’m sure you speak better English than I speak Cantonese, but I would be willing to fix your ad copy for two custom ukuleles.”

The owner of the company got back to me to say that they are not interested in distributing to the United States right now. But he also said, “I happy to trade you a custom ukulele to fix site words.”

He agreed on the trade after seeing a writing sample. After going back and forth about for about 3 months, I now have custom ukulele. The guy even laser-etched my Polynesian tattoo design into the fret-board and the body of my ukulele. If I were to have a luthier make an ukulele here in The States with as much detail as this guy has given me, it would run $2000 to $3000.

Most people forget about bartering these days. But the next time you’re low on funds or you see where you can trade services, give bartering a shot. You may be surprised what you end up with. 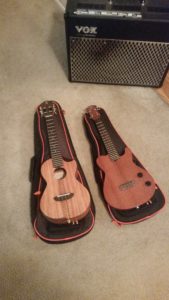